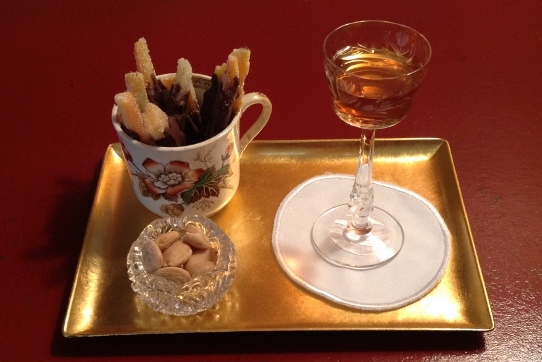 I found the following recipe written on FaceBook and thought it sounded so good and was so charmingly written that I would try it.  My Americanized version follows it and I’ve substituted fruit available here in the States. I have not been able to find the writer, but she claims to have taken it from someone else, so it is not her own.

“Tony does the sloe and he’s keeping his sloe hideaway and his recipe to himself! Blackberry and Apple liquor most people make with gin but I’m doing it with brandy as I love a bit of brandy every now n’ again. The recipe is:

Sterlise jar – Kilmer ones are great b/c they’re airtight and sturdy. I put the oven on to heat it up, tune off (she may have meant “turn” off) and pop jar in for 15 mins. Remove using gloves, tea towel; don’t wanna end up with burnt fingers.

Equal parts of chopped apples and blackberries – I use 8 oz per jar. Place in jar.

Add 7 oz of sugar. Fine sugar dissolves quickest so use caster sugar. Final part is add bottle of brandy/gin/what’s your liquor! (I’m a bit rubbish with measures so add a good size bottle, not a litre)  Shut lid. Turn upside down and shake so that sugar gets mixed in.  Leave in a dark place.

For the first week shake or stir each day so that sugar becomes dissolved.

The recipe I took this from said to leave for 4 weeks but I’m gonna leave until Xmas.

I don’t know what a Kilmer jar is, mentioned in the above recipe, but I have learned that you will need a jar with a wide mouth that is large enough for a ladle to fit into. Not easy to find. The one in the picture I purchased at Hobby Lobby. It is 7” tall and the base is 5” in diameter. This one holds 18 cups of liquid, right to the top. Take your ladle with you to make sure it fits into the mouth of the jar. This is a Ball brand Mason jar.  While there, you can also buy a package of cheese cloth 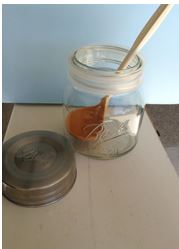 which you will need for straining your sloe when it has aged.

I have never tried this recipe with gin, but that will be my next attempt. For whiskey, you can use your favorite brand.  The above recipe says  not a litre so your next smaller size would be 750 ml. or ¾ of a litre.

One  large basket of red raspberries, at least 12 oz. Cut each berry in half.  Drop into jar.

¾ cup Sugar – more or less—is  your apple sweet or sour ?

750 ml whiskey of your choice

Bottle in which you plan to store your whiskey. Your original whiskey bottle won’t be large enough as you have added sugar and fruit.

Pour a cup or two of whiskey into the jar with the fruit and sugar. Swish around to mix well, then add the rest of the whiskey. Mix again. Cover tightly and put aside, giving it a shake or stir every day or so until you can see that the sugar is completely dissolved.  Let stand in a dark place for at least a month – two won’t hurt.

When ready to be bottled, cut a large square of cheese cloth with  4 or 6 layers of cloth, large enough  to hang generously over a bowl or cup that has a lip that will allow you to pour into your bottle. Ladle your mix into the cheese cloth. When the liquid has drained down, pick up the sides of the cloth and squeeze the cheese cloth to get all the juice out of the fruit. Discard fruit pulp and continue in this manner until all has been strained.  This is rather a messy sticky process.

I like to serve this after dinner with some lovely salted Marcona almonds and if you are lucky I will have some of my chocolate covered candied orange peel.  A wonderful dessert.

How to drink Sippin’ Whiskey