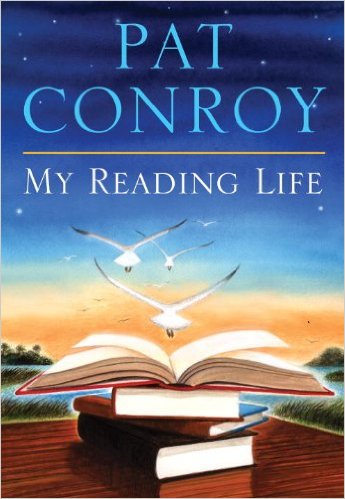 My editor, Bill Hammond, posted this on FaceBook:  “I am reading Pat Conroy’s, MY READING LIFE and when I am through, I will read it again.”

A better recommendation, I’ve never received.  I immediately checked Sarasota’s library catalog and it was indeed there, and in Large Print.  If you can read it in Large Print, do so, the better to indulge Mr. Conroy’s large, voluptuous vocabulary.

I found a comfortable seat in the lounge with the regular newspaper-readers and decided to read a few pages.  The first time I looked up from the book was on page one of Chapter Three, The Teacher.  I had already learned that Mr. Conroy hated his Marine father, and with good reason as he had been regularly and viciously beaten from a young age.  He says of his father, “Among his fellow marines, Donald Conroy’s horrible taste proved unerring, and he attracted a string of odd-ball friends who should’ve been eligible for any catch-and-release program.  For the most part, they were third-rate men who spread rich marmalades of loathing over their own wives and children.”

Well, that did it!  “rich marmalades of loathing”.  The words were so  luscious, so perfect! It put me on the floor.   I snapped the book shut, quickly checked it out, stopped at Culver’s Butterburger for a take-home lunch and continued reading, stopping only for a quick dinner.  I continued reading until I turned off the light at bedtime.  The next day I only managed one or two hours of reading time but finished the last page in bed at 12:10 am.

While it is Pat Conroy’s intent to tell us of his reading life, his reading pleasures and favorites, which he does on every page, it is a beautifully written memoir.  And if you ever copied a list of “Books Everyone Should Read Before They Die”, throw it out and make a new one from the Bold Print titles that appear on every other page.  It’s all you will need for the rest of your life.

His personal library is in the thousands and he has read each of them, some as often as three times.  WAR AND PEACE he read the first time in his teens. The second time he  was in his 30’s and had made his living writing novels for a good ten years.  But he wanted to seek a deeper mastery of his craft and so he took thorough notes, made charts of battles, wrote down family trees and tried to plunder the riches of Tolstoy’s art.  He read accounts of Napoleon’s life and the court life of the Russian aristocracy at the time of the French invasion and studied biographies of Tolstoy.  He goes on to dissect the characters so well-defined by Tolstoy and though he had first fallen in love with Natasha Rostova as a teenaged boy he says I “let it happen again after my third reading of this inexhaustible novel at the age of sixty-one.

Many  writers of far better ability than I become stymied in this next area of writing.  Too much show and not enough tell?  Or is it too much tell and not enough show?  Invariably I get it wrong, but it seems Leo Tolstoy never struggled with this phenomenon.  Mr. Conroy himself, waxes poetically about him.

“The language of Leo Tolstoy will seldom amaze you.  Not a single time do you have to struggle to understand what he is saying or what he is trying to convey to you.  There has never been a writer of his mastery who wrote with such clarity and ease.  Never does he want to confuse or neglect you.  When he takes you on a wolf hunt, you will know exactly how it feels to be on horseback in the pursuit of a wolf in the middle of Russia.  If you accompany him to the battlefield of Borodino, you will know precisely how it felt to be a Russian general, an artillery officer, a rifleman on the front lines, a French drummer boy, a cavalry officer, or Pierre watching the battle from the knoll at Gorky.  If Tolstoy takes you to a dance in Moscow, he will teach you how to act, and you get the feeling he would actually like to teach you how to dance.  When Moscow burns, he makes you feel the heat of the fires, the chaos in the burning city, the greed on the faces of the looters, and the terror of a pretty but unnamed Armenian girl fearful about being raped by the rampaging French soldiers.  Tolstoy can make you feel anything he wants you to feel, and his artfulness is of such a high order, you are unaware of his doing it.”

It’s so difficult to do that.  I will reread this paragraph before I go back and edit each page of my latest attempt. There is so much information for the writer to put into their box of tools.  No wonder Bill says he will read this book again.  And, I would guess, yet again.

Pat Conroy  says he has built a city from the books he’s read and thousands of them go with him everywhere he goes. “Here is all I ask of a book—give me everything.  Everything, and don’t leave out a single word.”

He also advises, “Reading is the most rewarding form of exile and the necessary discipline for a novelist who burns with the ambition to get better.”

“Reading and prayer are both acts of worship to me.”

“Good writing is the hardest form of thinking.  It involves the agony of turning profoundly difficult thoughts into lucid form, then forcing them into the tight-fitting uniform of language, making them visible and clear. 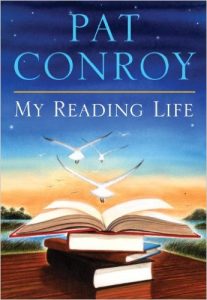 He is as passionate about poetry as prose.  “Across from where I write,” he says, “I keep a strong-shouldered squad of poets at my beck and call.  Though there is a changing of the guard, I try to find the clearest, most mesmerizing voices to jump-start me into creation.”  He expounds on each of them and how they pleasure him.  He says, “A young man or woman could take that string of books, study them with no small degree of fanaticism, and spend a far richer year than they ever did at  a university.”

“Each day of my life begins with a poem that will unloose the avalanche of words inside me, that secret ore that, once polished, will sit before me disguised as the earth’s jewelry.  I’ll select from its garnets, its milky-eyed opals, its insect-killing amber—it’s the language I revere above all.  I cheer when a writer stops me in my tracks, forces me to go back and read a sentence again and again, and I find myself thunderstruck, grateful the way readers always are when a writer takes the time to put them on the floor.  That’s what a good book does—it puts readers on their knees.  It makes you want to believe in a world you just read about—the one that will make you feel different about the world you thought you lived in, the world that will never be the same.”

And that dear readers is exactly what Mr. Pat Conroy has done with his book, MY READING LIFE.

2 thoughts on “My Reading Life by Pat Conroy”