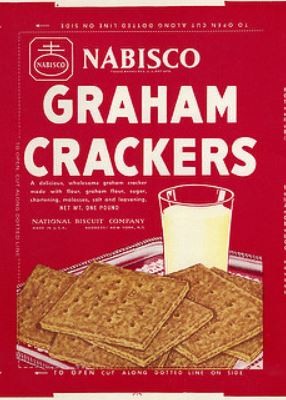 My grandson told me that he has a required course he must take in order to graduate and a new professor has been appointed.  The previous professor is now the new supervisor. It is an independent study course where a subject is designated and the student will then study it and write an essay or thesis on it.  The catch is – the student must spend 135 hours in study of this subject and a timesheet must be turned in with the essay.

My grandson says he knows the subject well and has already done some reading and research on it.  He feels he can do the work and finish the course in less than 135 hours. He wonders what would occur if he did finish the course in less time.  Would he be failed?  Would he be given an incomplete and be required to take the course again?  He meets with the professor next week to pose this question.  He asked for my opinion and:

I told him that graham crackers were not to be found in the cracker aisle.  They are in the cookie aisle.

Does no one see the word CRACKER on the box?  In previous decades I had pondered as to who could be responsible for this strange anomaly?  When I asked clerks and shelf-stockers in several different stores why this was, I had received a shoulder shrug as though it was unimportant and was told to talk to the manager.

Ah, I thought.  Here is the person who will be able to fix this obvious error.  You know how it is?  Once a mistake is made and repeated over and over by different people it becomes the truth.

I would set them straight.

The polite store manager told me they had had a meeting on this very subject. The store owner said his wife had made this decision.  She claimed that a graham cracker was nothing at all like a cracker.  Was it orange and round, packaged in tubes?  Were they white with little pinholes on the top with salt sprinkled on them?  Do they come in bags, cheese-flavored and in odd shapes, some even shaped like little fish?

When you open a box of graham CRACKERS  they fit the exact shape of the box.  Their color is a warm beige and when you bite into one it is sweet.  Sweet, not salty or cheesy or olive oil flavored or anything but a warm sweetness enters your mouth.  Sometimes they are even seasoned with cinnamon or chocolate.  This is not a cracker.  This is a cookie, no matter the name on the box.

So that is the reason you will find graham CRACKERS in the cookie aisle in all stores.  One store owner in a remote city had a boss/wife who made a decision that has ricocheted around the country and is followed by every store manager in every grocery store, both large and small.

Everybody has a boss.   Even the Pope has a boss.  How well you listen to your boss could result in an inspired or disastrous choice.

My grandson's professor has made his choice.  So I hope my grandson will come to realize that his new professor’s graham cracker-decision has been made for him.  He may well be following the dictates of his boss and have no choice in how he presents the curriculum for this class. It is doubtful that he will ever tell this young student the reason for what seems like a superfluous number of study hours.

Suck it up, Cupcake. This is the real world.

One thought on “Everybody has a Boss”