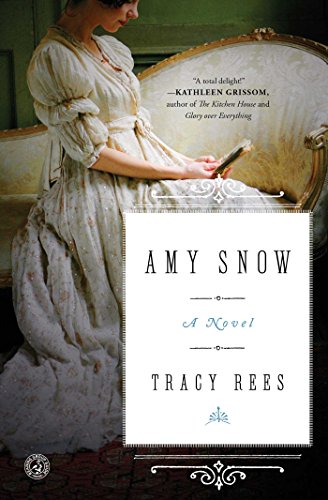 Winner of the UK’s

Richard and Judy Search for a Bestseller Competition

This is the blurb on the back cover that lured me:

Abandoned as an infant in a snowbank in 1831 on the grounds of an estate in England, Amy Snow is discovered by the young heiress Aurelia Vennaway. Despite Aurelia’s parents’ cold and unwelcoming disapproval, the girls grow up as close as sisters. So when Aurelia dies young, Amy is devastated, abandoned once again.

But Aurelia has left Amy one last gift: a coded letter that hints of a secret Aurelia never revealed. The letter starts Amy on a treasure hunt all over England; and at each stop, Amy receives a new letter from Aurelia, delivered by a fascinating character with mysterious ties to her friend. Although she is distracted by two dashing and eligible gentlemen and pursued by the vengeful Vennaways, Amy is determined to unlock her friend’s secret, a final gift of love for the orphan once left in the snow.

My writing of the third book in my series had come to a standstill.  I needed to engage my characters in secrets and perhaps some violent action. I don’t enjoy reading mysteries or action type books. I was having trouble envisioning my characters in that sort of behavior. Yet, that is exactly what I needed to write, in order to finish my book, Tessa’s Promise.

Tracy Rees’ book, Amy Snow, promised mystery, seduction, nasty villainous characters and love. It took place at the end of the Regency Era; the time period of which I write. I looked forward to seeing if, perhaps,  Tracy Rees would show me the formula for writing this type of prose.

Whenever I write, I listen to classical music. I find that Bach is especially conducive to calm, precise writing. The mathematical precision of his compositions, his repetition of a melody with only slight variations, is at times, almost hypnotic.  It creates a background that doesn’t distract me from conjuring up new plots. Then suddenly, Herr Beethoven would be aired and I would find myself humming along until there would be a passage that insisted  I stop and listen only to his music.  I’d be forced to follow his phrasing to the climactic end of might escape rhapsody.

Reading Amy Snow is like listening to Beethoven.  Her storyline hurries you along, always anxious to reach the next clue or impossible character.  Then a phrase will stop you dead in your reading and you will find yourself backing up to reread her wonderful words.

Let me share three quotes that show her charm and will bring a smile to your face as you read.

I chuckle at the vision she creates when she and two friends say goodbye to a particularly enthralling gentleman.  She says, “We are left, all three, gazing after him like ducklings in a row.”

Reading on, Amy takes us to her next quest. She reminisces about her past life and of the man who had been chosen by Aurelia’s parents, to be her husband. Amy and Aurelia both hated him.

Amy says, “Bailor Dunthorne! How could I forget? An hour spent in his presence was like an hour in a chamber of falling swords. You might be lucky. You might escape without injury. But it wasn’t assured, and the experience was accordingly enjoyable.”

As you shudder at this assessment, you cannot help but cheer her appraisal of that man.

Amy finds herself being courted by Mr. Garland, a very elegant gentleman, and she shows her self-deprecation with these passages:

“I had not even offered him a seat! Madeleine rectifies this and we all sit, I rather heavily, like dough being flung onto a table, Mr. Garland like butter melting in a pan.”

“I feel as though all my emotions have been stirred like a pudding and risen to the surface like steam.”

When Amy finally does meet the man she says she loves, he tries to tell her why he is not ready to be her husband. He says:

“Only I am not yet the man I want to be. I am like the outline of myself. I want to be the full portrait.”

Oh my! How old were you when the whole portrait of yourself appeared and you realized that your mere outline was no longer there?

Too soon I noticed that there were only about a half an inch of pages left in the book. While I couldn’t wait to read Amy’s final letter from Aurelia,  I didn’t want the book to end. I was ready to have the final mystery revealed, but not ready to leave the entrancing world that Tracy Rees had created. So, in order to delay the end of this wonderful book, I set it aside and left my chair to attend to some mundane household chore, only to hurry back as soon as I could.

Amy Snow turned out to be a “soft” mystery and a treasure hunt that, even with a committee, would take you or me a year to organize. It was beautifully structured and the people she met along the way were characterized in a manner that added to the fullness of her new life and to the reader’s wonder of, “What could possibly be next?”

I am a person who loves words and the clever and sometimes quixotic use of them pleases me.  If you and I share this characteristic, you will fall in love with Amy Snow—and Amy Snow.